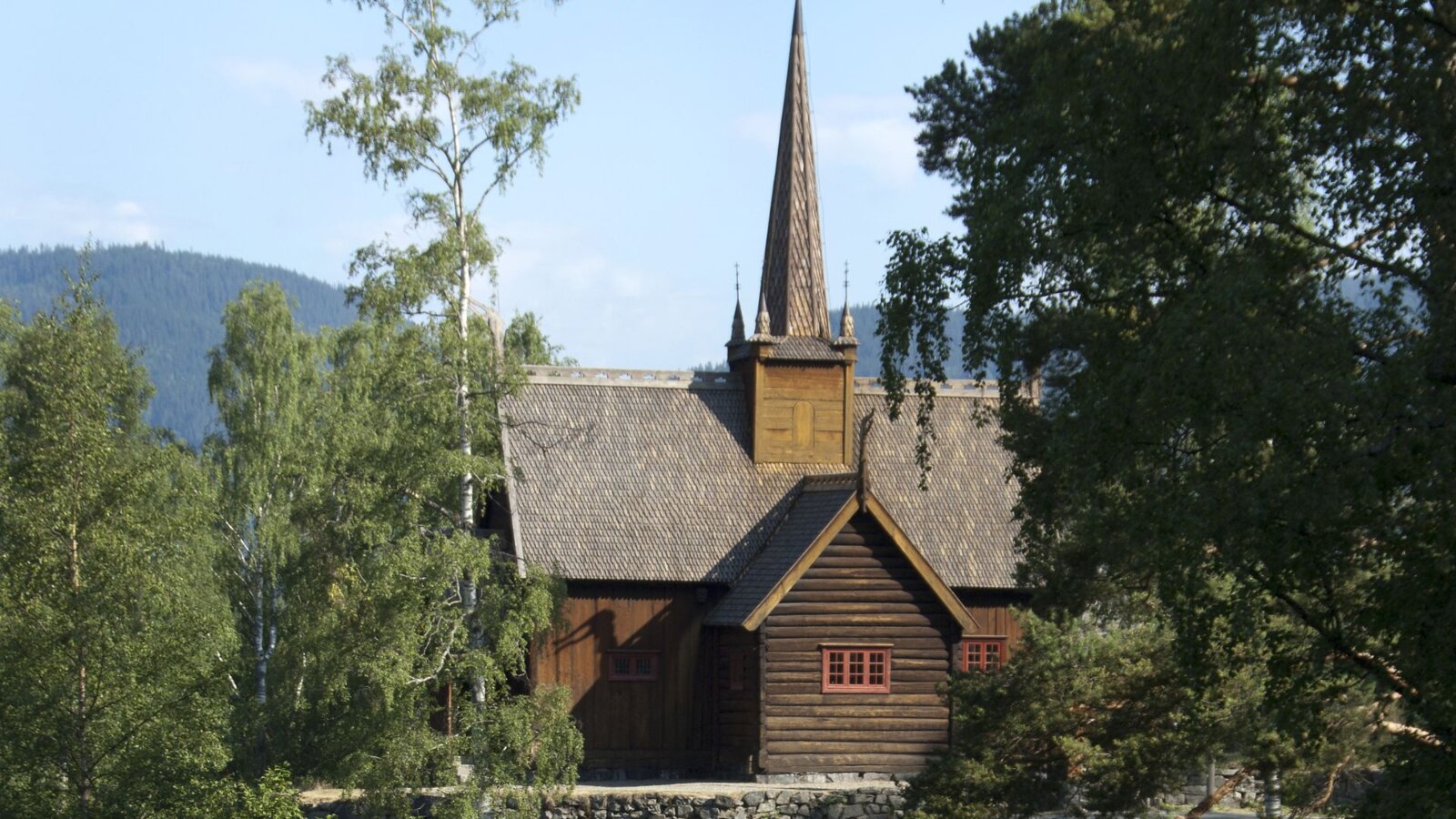 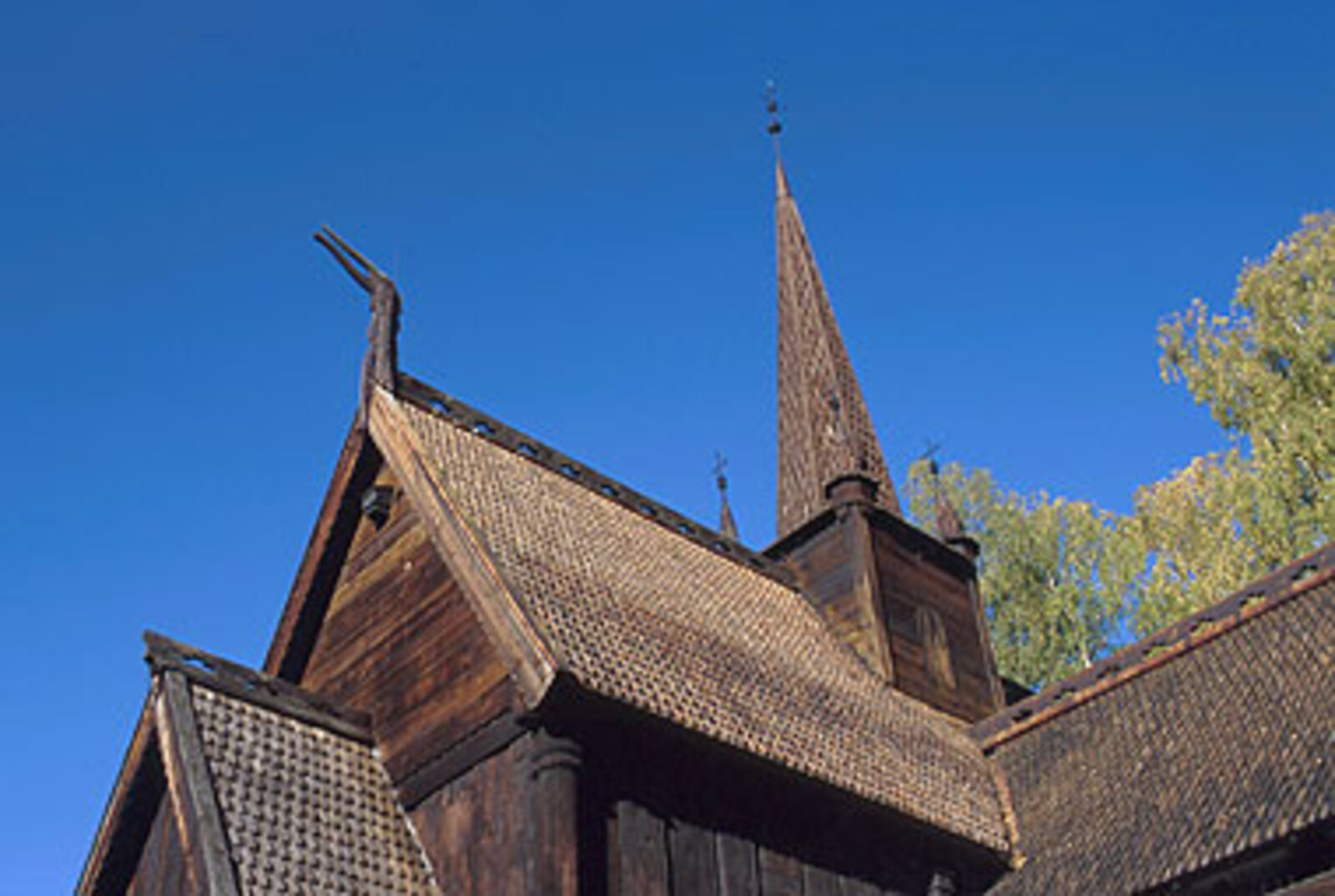 Garmo stave church has been extended several times, the latest during 1731, when the church was given its current shape. Photo: Maihaugen. 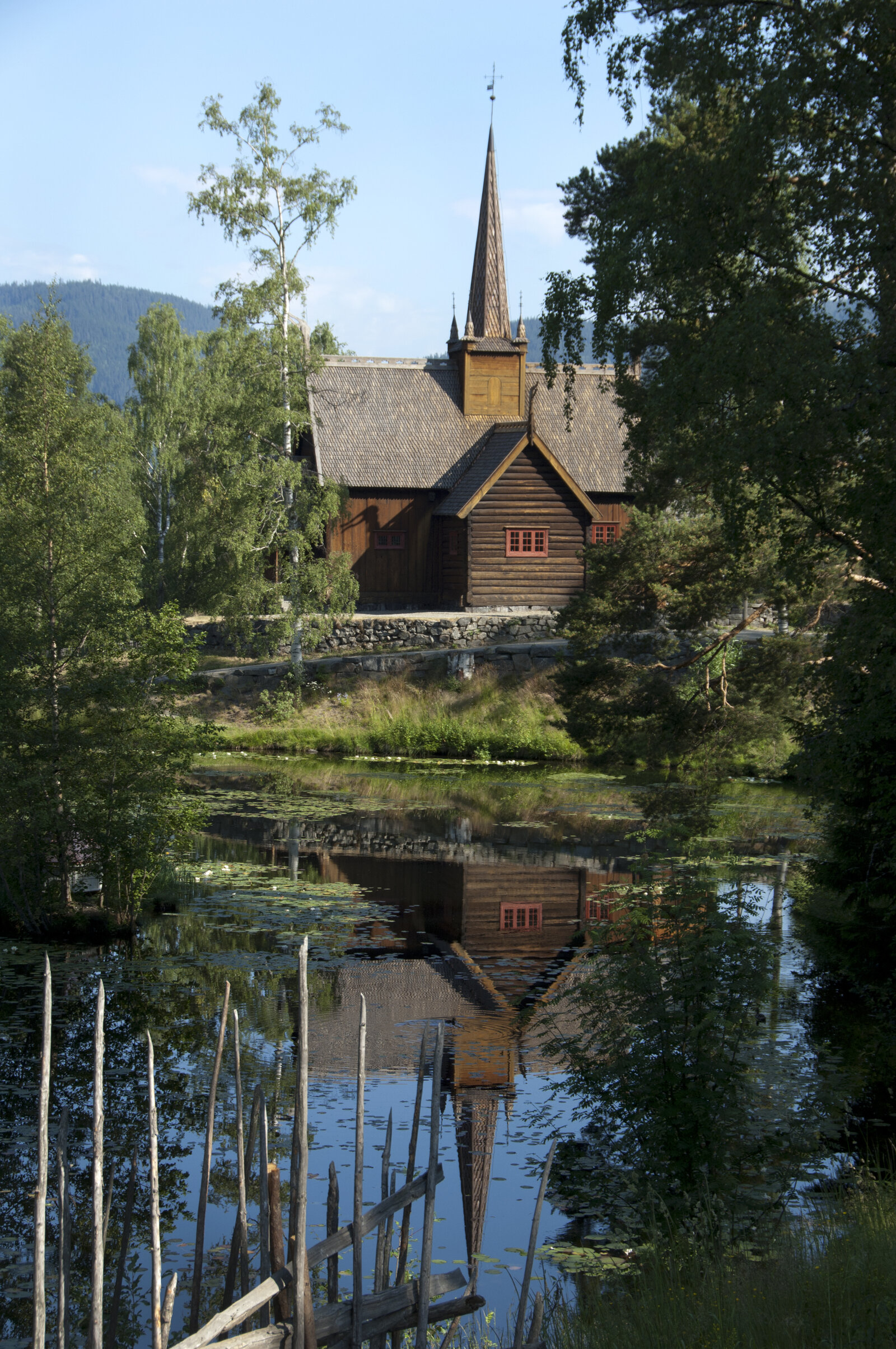 Garmo stave church at Lillehammer is located in a beautiful place by one of the small lakes at Maihaugen. Photo: Camilla Damgård/Maihaugen. 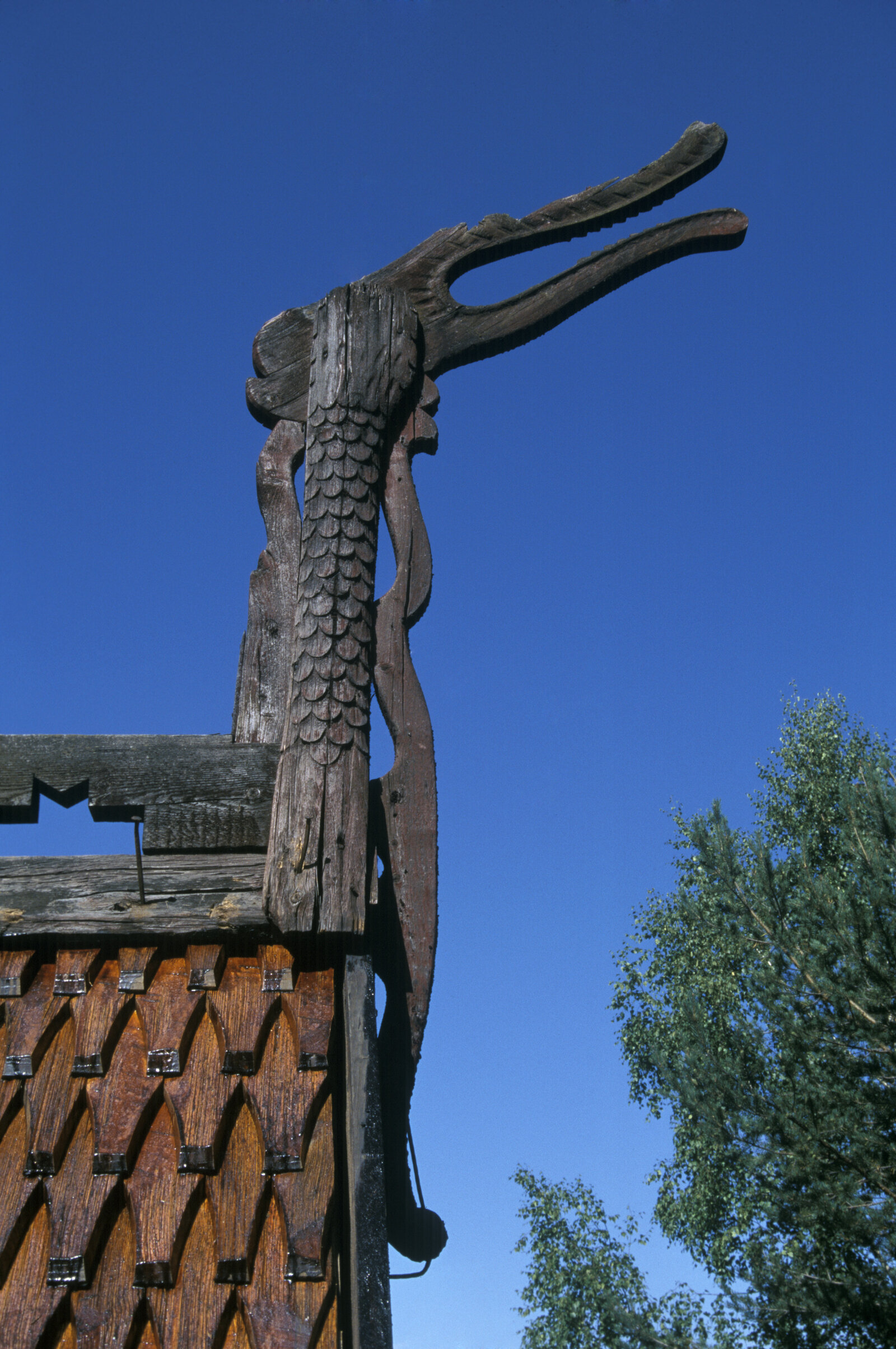 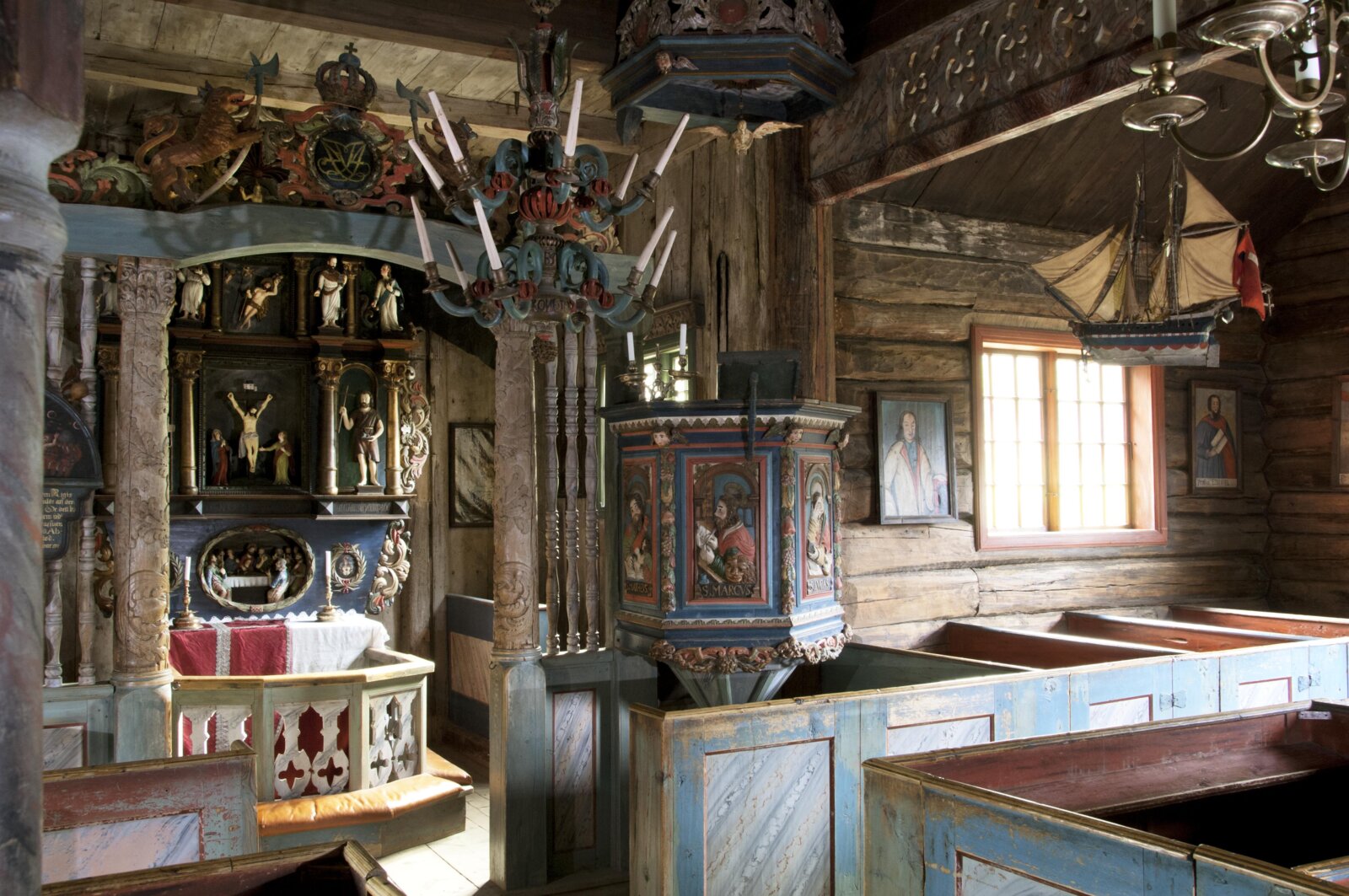 The beautiful altarpiece and side aisle in Garmo church. Photo: Camilla Damgård/Maihaugen.

The pulpit was made by Peder Knudsen Kjørsvik around 1738. Photo: Camilla Damgård/Maihaugen.

Garmo stave church is located at the top of the hill near the entrance to the Open Air Museum. It is the most striking building at the museum with its pointed tower with dragon heads on the ridges of the roof gazing out to the horizon.

The church was built early in the 1200’s, but has been extended several times, most recently in 1730. This was when it was given the current characteristic cross shape. The church stood originally at Garmo in Lom. It was dismounted in 1880, but the materials were kept and the church was reconstructed at Maihaugen in 1921.

The church symbolizes the parish church of the village, and shows what a church looked like in Gudbrandsdalen in the 1700s. It carries history from the middle ages up to the present day. The altarpiece and the pulpit are parts of the church’s fittings that carry a message to the congregation through their motifs and symbols.
The children of the village were christened in this church and the font still stands in the chancel today. On an August day in 1859, Nobel prize winner Knut Hamsun was christened there. The church was at the centre of festivities such as christenings and weddings, and this is where Christian life was maintained from one generation to the next by the church services.
The church also served as the only gathering place for the village before the arrival of shops and assembly rooms. Agreements of different kinds were made here, the young people gathered here, and perhaps the fire of love was lit here too.