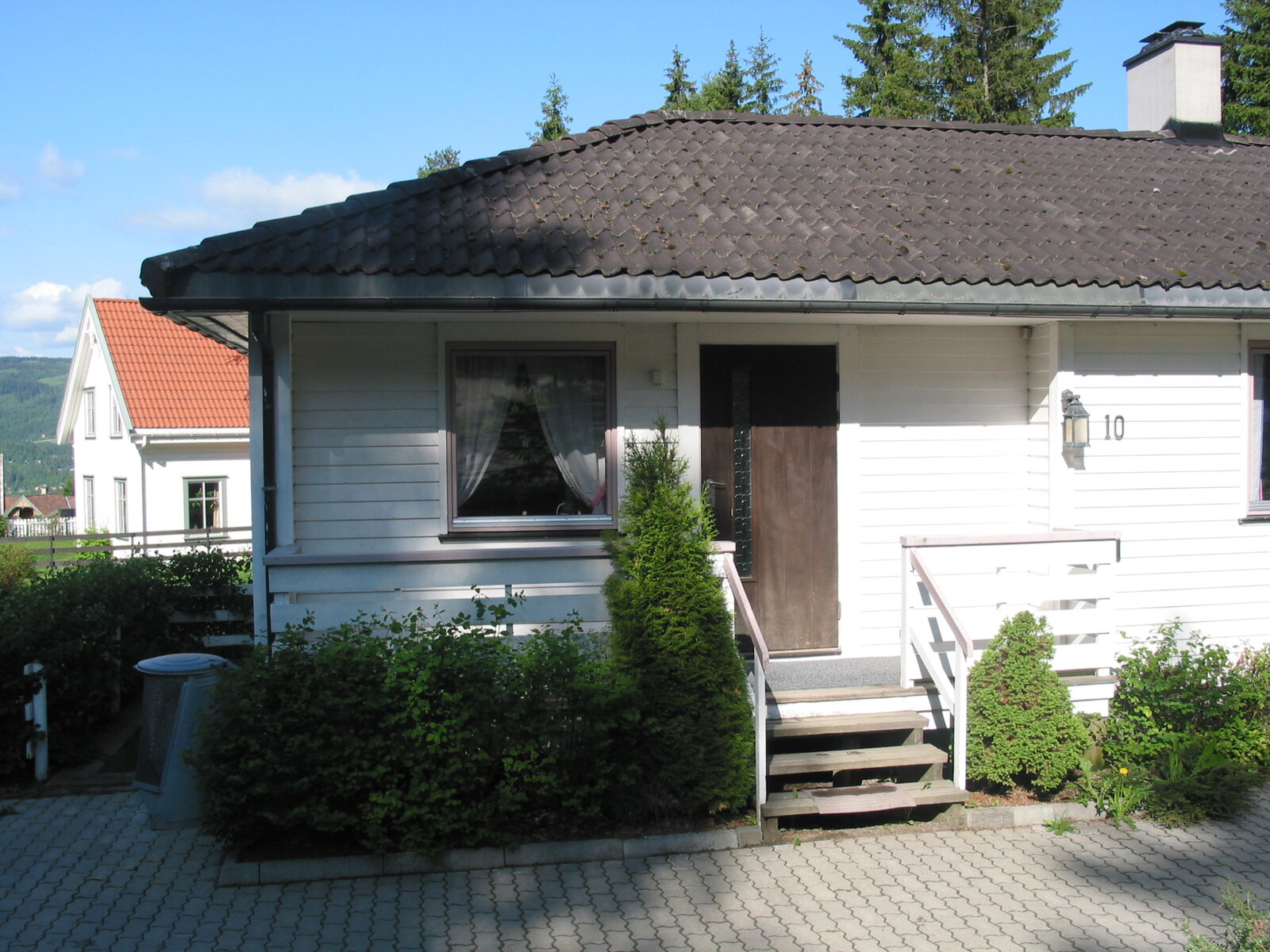 The house from the 80s in the Residential area at Maihaugen. Photo: Maihaugen 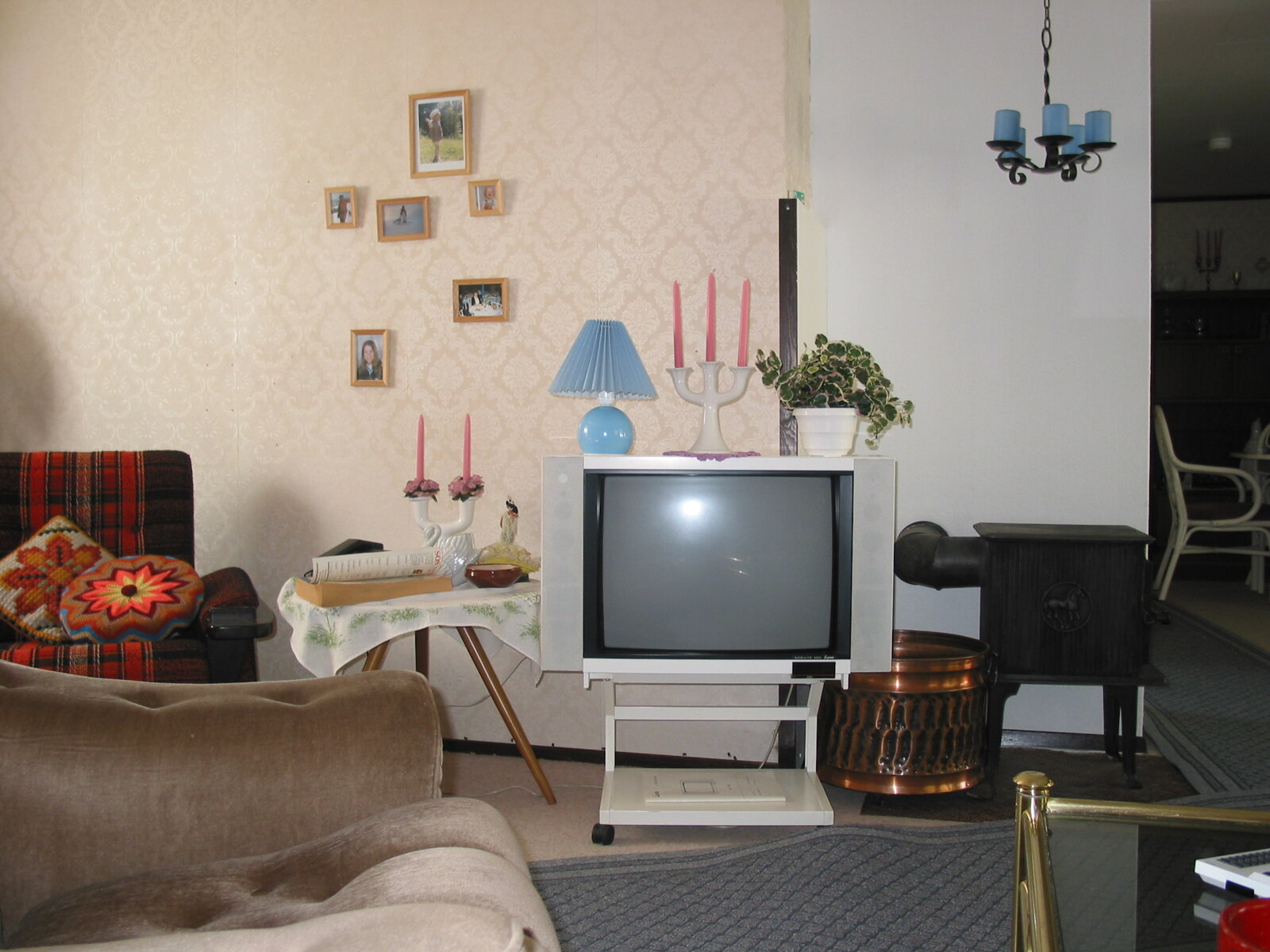 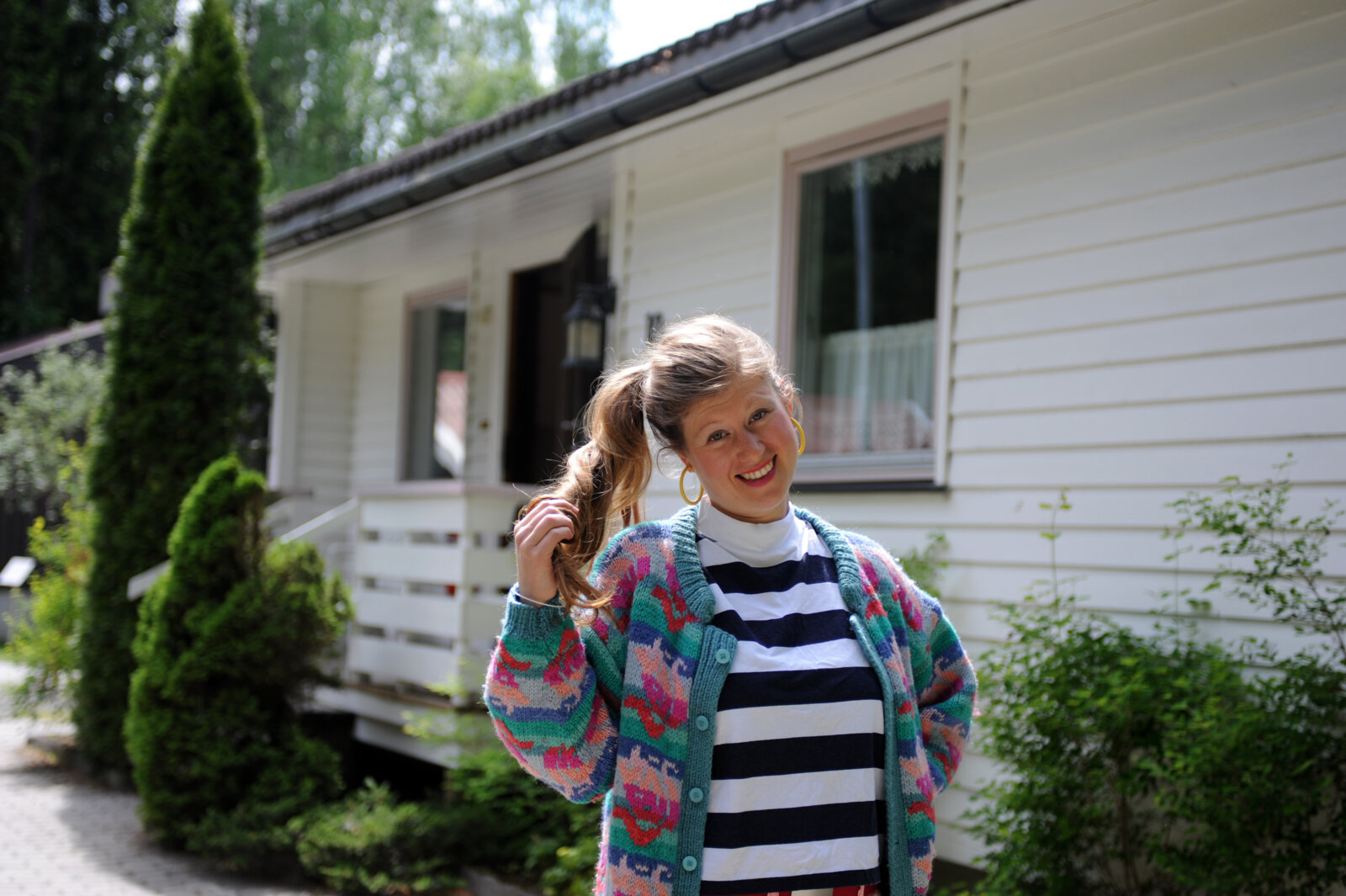 The 80s house is open during the summer and you can meet this girl. Photo: Esben Haakenstad. 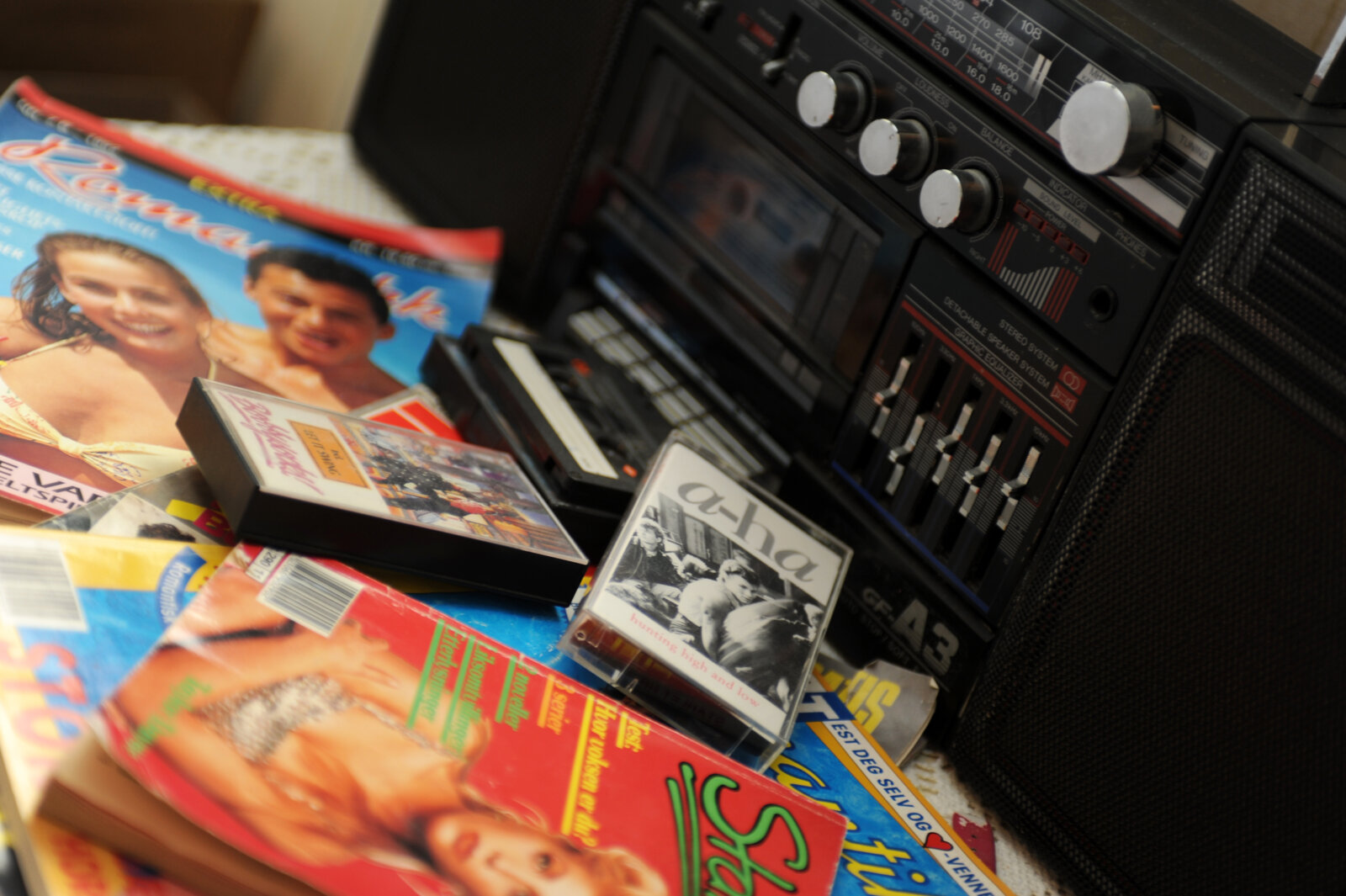 Many teenage rooms during the 80s contained cassette by A-ha and the magazine Romantikk (Romance). Photo: Esben Haakenstad. 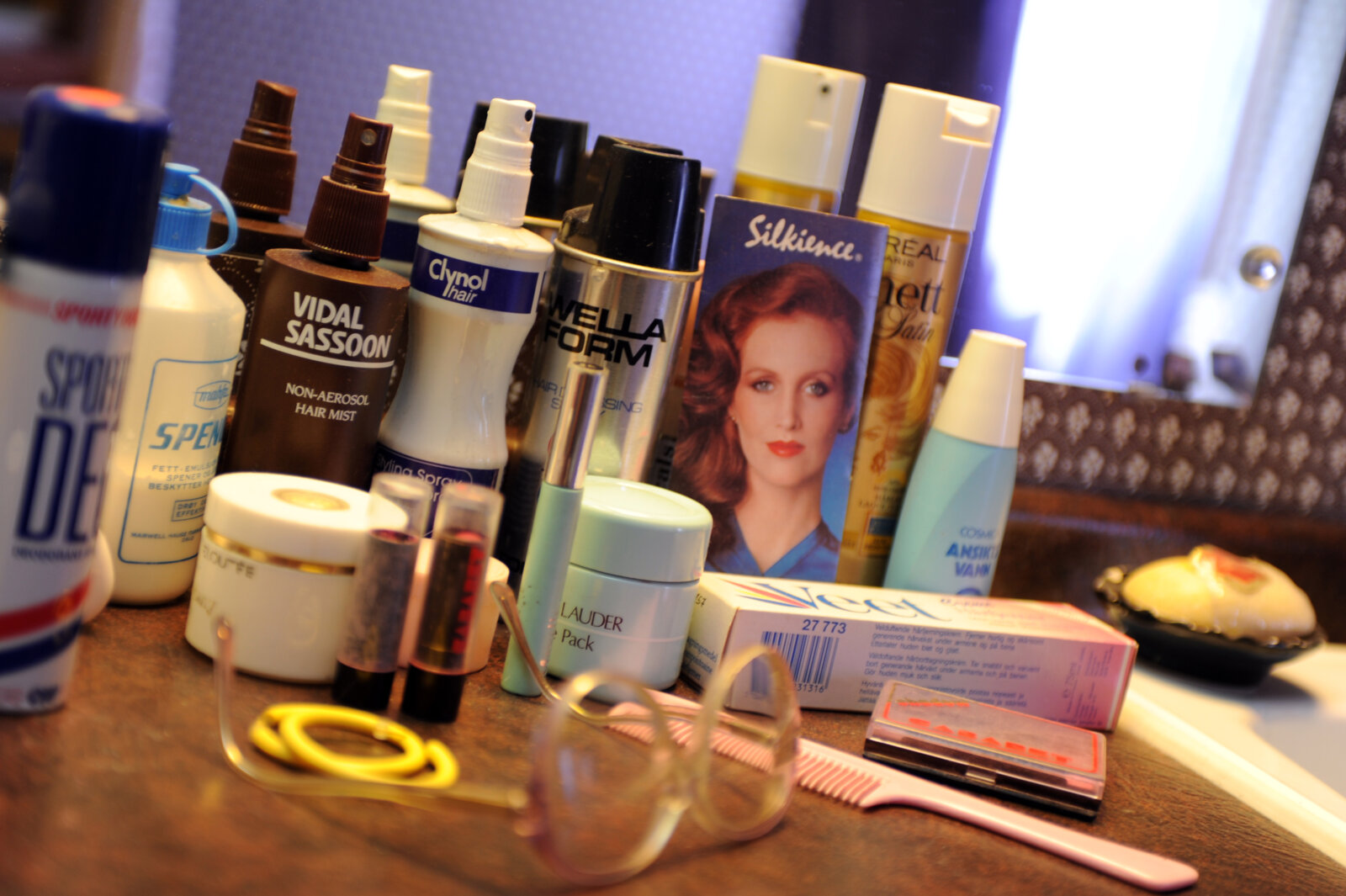 Lots of hairspray was needed to get the hairstyle of the 80s to sit perfectly. Photo: Esben Haakenstad.

The 80s family living directly across the street from the 70s house, has chosen a house produced by Block-Watne (Block 18). The family living here consists of a mother, a father, a teenage daughter and a young son.

White houses have become popular. The house consists of one floor with a full basement. It has a hipped roof covered in black cement roofing tiles. The window surrounds have been painted pink.

Pastel colours also dominate indoors, pink, light blue and mint green. Patterns are not as eye catching as in previous decades. The housewife’s interest in crochet can be seen from all the small crocheted doilies and other handiworks that have been started and are dotted around the room. The living room has a so-called Korea panel in synthetic mahogany on the end wall, a light coloured velour bowed corner sofa and a large, brass coloured table with a glass top.

The terrace is large and partly built over. The outside has become a more important part of the house. You must grill, eat and play and the body must be tanned and trim.

Holidays in warmer climes are still out of reach for most people, but you can save miniature bottles anyway when you live close to an airport. The collection of these bottles dominates the living room in addition to other trinkets. The family has also obtained some old objects. It is fashionable to have antiques on display and a samovar and an old milk churn are used for the purpose.

One of the many typical 80s articles is the water bed in the parents bedroom. This was very popular for a period, but soon problems arose. Sea-sickness might have been the reason or if there was a big difference in weight, one would lie at the bottom whilst the other had to balance on the top. Leakage and fungus could occur. Water beds are in the main history today.